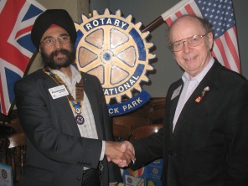 Our speaker on Wednesday 7 March 2012 was our own member Dick Nathan who spoke on the changes being proposed for the organisation of Rotary International in Great Britain and Ireland (RIBI). Dick’s talk took us through the history of RIBI – briefly – and described the shortcomings of the structure that we have at the moment. Dick then described the studies that were made last year in terms of organisational goals, committee structures and the focus groups both of Rotarians and members of the public that gave depth of view to the studies. The end result was a series of recommendations and a new way of working. Dick also talked about the analysis of the questionnaire that had been published last year and whilst overall 10% of the membership had responded, it turned out that about 25% of the Club had completed the questionnaire. An interesting talk that produced a lot of questions, most of which Dick was able to answer. Thank you Dick!