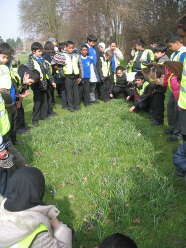 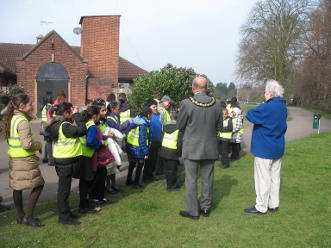 Pupils of Norbury School in Harrow took time out of their busy schedule for a visit to the Harrow Recreation Ground on the morning of Wednesday 14 March 2012. Their purpose was to re-visit the question of Polio Eradication. Accompanying the pupils were the form teachers and several school governors, including Jane Galbraith, as well as members of the Harrow Recreation Ground Users Association. In the autumn of 2010, pupils of the school planted a large number of crocus corms provided by the Rotary Club of Northwick Park to celebrate Rotary International’s achievement of eradicating 99% of the polio cases in the world since their start on the project in 1985. Each year the crocuses flower reminding pupils of what has been achieved. The flowers are purple in colour to remind the pupils of the Purple Pinkie story that tells those providing the immunisations if the child has already been immunised. The pupils were particularly impressed that India has now gone a full year without a reported case of polio. The Rotary Club of Northwick Park was represented by Helen Antoniou and Dick Nathan. 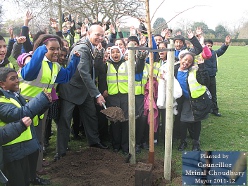 Mayor of the London Borough of Harrow, Mrinal Choudhury, was guest of honour with the Lady Mayoress, and took the opportunity to plant a tree in the park celebrating his year as mayor of Harrow. His chosen tree was a variety of redwood and it looked very smart in its place amongst the avenue of trees that have been planted in recent years by Mayors of Harrow. As you can see in the photo, the planting was loudly and enthusiastically celebrated by the pupils of Norbury School, Harrow!