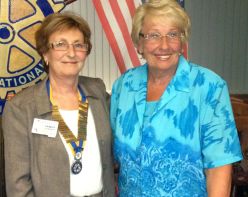 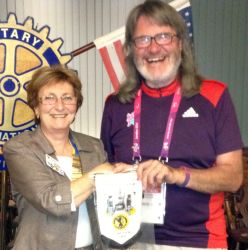 Peggy Cohen was inducted as an Honorary Member of the club on Wednesday 5 September by President Sandy.

Peggy devotes much of her time to worthwhile charitable causes and is our vital cog in delivering our collection of bottle tops to Portsmouth which are used towards paying for vital medical equipment.

Also, on the same evening, Adrian Ramsden, from the Rotary Club of Macclesfield, presented his club banner to President Sandy. Adrian visited us as he was in London as a Games Maker for the Paralympics along with our own Mike Billington.