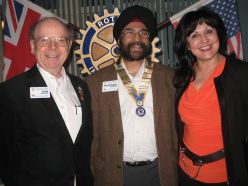 Following several months of hard work by many members of the Club, we finally got to our Felsted Aid Dinner Dance on Sunday 29th April 2012. The evening was a great success, and was attended by both the Ambassador to the UK from the Ukraine, and by the Director of the Revival Centre in the Ukraine, and the music was provided by King Groovy and the Horn Stars. Our Speakers at the Club on Wednesday 2nd May 2012 were Helen and Dick, who had come to give the Club a report on the outcomes from the event. Part of the team on the evening had come from Barclays Bank Fundraising Events team, and both Helen and Dick were full of praise for the hard work the team from Barclays had contributed on the night. Finally they revealed the total outcome from the evening – which was in excess of £10,000. President Pushpinder was delighted at the outcome, and wished the team well in their search for the much needed replacement van to be donated to Felsted Aid for Deprived Children.