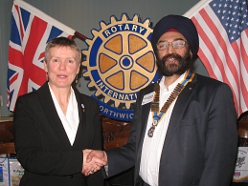 Our speaker on Wednesday 1 February 2012 was Lesley Close who tackled one of the last remaining taboos in her talk – Death. Lesley’s brother was a competent musician and a marathon runner when he developed Motor Neurone Disease (MND). Within a period of two years he went from being ‘slightly awkward’ to being unable to do anything. Lesley gave an emotional description of his disability. As his illness progressed, he contacted Dignitas in Switzerland. Although not the cause of his decision, he did suffer from inexperienced carers: when one inexperienced carer arrived and was sent back, another inexperienced carer would arrive. After negotiations with Dignitas, he was finally able to choose a date and arrange the flight tickets. On the final day, he was allowed to be in control of his own death. Lesley described how in 2003, at the time of her brother’s death, one could arrive at Dignitas and die on the same day. Rules there have changed, and now it requires a stay of three days. “Dignity in Dying” is a movement of people who want the equivalent of Dignitas in the UK. Lesley described how the majority of people who sign up as potential clients of Dignitas never actually take up their option, but knowing that the opportunity exists is a comfort to those who are terminally ill. There were no questions. Lesley is to be congratulated on tackling such a difficult subject in the way she did.