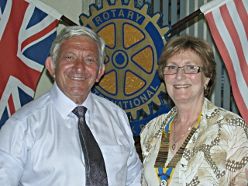 Our speaker on Wednesday 25 July was Colin Okin. Colin was giving his second talk to the club – the first being on Archery in April 2009! His subject this time was Corporate Purchasing on a Large Scale.

Colin has had a long career in catering and food purchasing, starting out at the Reform Club as a chef then becoming a restaurateur and then moving on to Associated British Foods. He then worked with Granada on motorway service areas, Toby Restaurants (240 outlets) and finally with the Bass group of companies with a purchasing budget of £60m per year.

Colin took us through the process of creating a commercial menu as opposed to doing a weekly shop and explained the difference between Prices and Terms. His final anecdote concerned a 4oz sausage which was priced on the last hole of a golf course. The result was a free lunch for the winner and a £9000 bill for the loser!

Colin is an accomplished public speaker who entertained us well and we wish him the best for his first Archery Stag Party event.