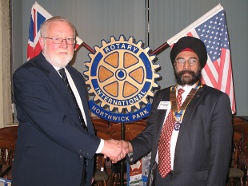 Our speaker on Wednesday 2 November 2011 was Peter Finch, Chairman of the River Thames Society. The River Thames Society was formed in 1962 to conserve the river for future generations and represents all river users whether they be fishermen, walkers, boat owners or just those interested in its very rich history, traditions, flora and fauna. It covers the whole river from its source up in the Gloucestershire countryside to the sea – a total of 215 miles (346km). The river is divided into two administrative sections: the river below Teddington Lock is administered by the Port of London Authority, and the river above Teddington Lock is administered by the Environment Agency. There are many distinguished people serving on the Board of the River Thames Society, including Lord Owen (President), Baroness Kramer, Michael Shefras, and David Suchet (all Vice Presidents). Peter also looks after the Thames Wardens on the lower reaches of the Thames. He told us about the customs and practices on the Thames in the old days, and how people hailed a “water taxi” or waterman when they wanted to cross the river. He also spoke about the huge Diamond Jubilee event planned for 3 June 2012 when a large flotilla of boats will travel on the River Thames. Peter also entertained with a selection of photos taken from the water on  board his own boat on the Thames. Thank you Peter for an insight into the life of ‘our’ river. The evening also saw the return of our Club’s Rotary Wheel!