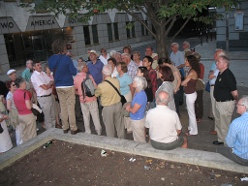 Several members of the Club assembled at Tower Hill Underground Station on the evening of Sunday 2nd October for the last District Walk of the summer. Led by Tom Hunt, we eagerly waited for our Guide, Steve who arrived exactly on time! He led us through several of the locations where ‘Jack the Ripper’ had performed his dastardly foul crimes. We were provided with information on the difficulties faced by the Metropolitan Police and the City of London Police working together on the crime, some of the gory details and several potential suspects were examined in locations where the events had taken place. A spooky evening walk that finished in one of the pubs frequented by Jack – allegedly. Our thanks to Steve who was a most entertaining guide, and to Rotarian Tom Hunt (in the black polo shirt) who organised the most successful event. Now we can’t wait for the walks to start again next summer!