Dublin Conference is a Cracker! 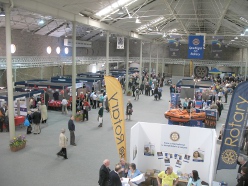 Starting with a frugal lunch on Friday 14th April 2011 that for once was truly frugal, the RIBI Conference got underway in Dublin. Speaker at the lunch was the Nobel Peace Prize Laureate Betty Williams, who is still fighting causes. The conference also attracted Rotary International’s World President Ray Klinginsmith who talked about meeting Bill Gates in 2009 and asked us “What do you say to someone who has just given you 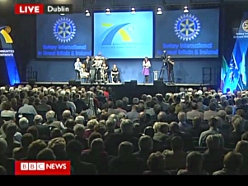 $255m?” Inner Wheel Chairman Pam McConnell who talked about the search for members and the plan to remove the Rotary qualification in membership. Dr Eric Motley, a former Rotary Scholar talked about his education, and urged us to continue giving a chance to people like him. The Question & Answer session passed quietly in the afternoon until one questioner asked “Where does the Rotary International Board stand on RIBI?”. 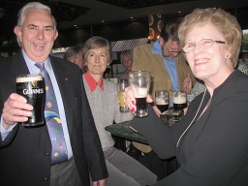 Saturday morning was devoted to Youth Projects, Dementia, and Focus on the Crocus. The morning also included the BBC News broadcast of the Rotary Young Citizens Awards, and included a young person living in our community, “Sumo” Charles. The afternoon included an open forum on PR, Marketing and Membership, followed by the RIBI Business Meeting. The good resolutions was adopted, the poor resolutions were all lost! Sunday saw more scholars both inbound and outbound, and we had a commitment that the outbound scholar is now ready to join Rotary. Terry Waite spoke on keeping Peace a Priority, and Jeremy Gilley talked about his project setting up one day of Peace each year (21 September). If he can set up one day, maybe he can get two or three and eventually maybe 365! Our member Di King was awarded the National Group Exchange Award. An important attraction for Ireland was that the Rotary Clubs of Dublin and Belfast both celebrate their centenary this year, and there was an abundance of