Ben Nealon pumps up the volume for Pump Aid 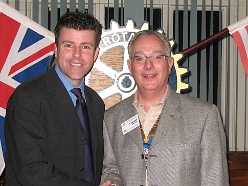 Our speaker on 20 April was Ben Nealon who came in his capacity as Development Director for Pump Aid. Ben has had a distinguished career as an actor, and it was whilst he was filming “Soldier, Soldier” in Zimbabwe he came to terms with the need for safe water at a local school. He told the story of a snake that fell into a well and as it decomposed released its venom into the water. One of the local aid workers new about a 2,000 year old chinese rope and washer pump, and soon the idea of Pump Aid was born in 1999. The design of the pump is only part of their success as they also depend on a pump committee for each pump to make sure the pump is maintained and the surround (which prevents entry by snakes etc) is well maintained. There are 85 employees now, but only three of them work in the UK (supported by volunteer staff). The ‘Elephant’ pump costs about