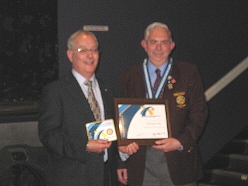 The Rotary Club of Northwick Park has been recognised for its achievements in the Rotary Year 2010-2011 by Worldwide President of Rotary International, Ray Klinginsmith. Many clubs receive a citation if they have a programme that touches all the bases set by the Rotary International President, but what has delighted the members of Northwick Park is that the Citation was given ‘With Distinction’ for going the extra mile in each category of activity. Immediate Past President Stuart was delighted to be called forward at the District Council Meeting on 7 July 2011 to receive the two certificates from Immediate Past District Governor David Storrie. This is the first year in which a ‘Distinction’ has been granted, and it shows that the Rotary Club of Northwick Park is at the vanguard in its programme compared to the 34,000 Rotary Clubs around the world.