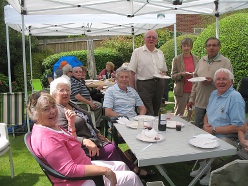 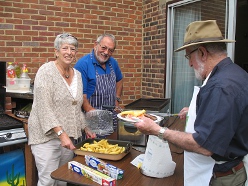 Another weekend – another barbecue!! Although the weather was threatening on Sunday 7th August, the members of the club decided that they would participate in Rotary’s attempt to get into the Guinness Book of World Records with the biggest barbecue party on record. There had been a dark cloud hovering over Edgware for an hour or so, but it did have the good grace to wait until we had arrived before it dropped its load on our party. Despite that, we all had a good time and our thanks go to Sydney and Lucille (pictured) who not only hosted the event, but with the assistance of Stan (hat) cooked a sumptuous feast for all those that attended. And judging by the expression on their faces, they were all having a really good time! Well done to the Crew!