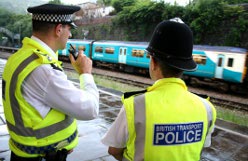 Our speaker on 1st December was Steve Seaman – not identified in our photo above for obvious reasons – he is a sergeant in the British Transport Police. The Transport Police started with the first railways, controlling the lines and signals, as well as the security at the construction sites. In the 20th Century, the railways amalgamated into four companies, with each forced to create their own police force. Early on, some of the police were killed whilst on duty, including some hit by trains. In WW2 everything moved by train and the number of thefts of goods from trains became a big problem! With nationalisation, one force was created to cover railways, docks and canals. The 2,835 officers police 10,000 miles of track and 2,500 stations throughout England, Scotland and Wales. The work deals with thefts, public order, assaults, tresspass, and grafitti. An excellent talk with a lot of humour and anecdotes – Well done Sergeant Steve!