Members from 10 other London Clubs joined us for our special meeting with the Rotary International in Great Britain and Ireland (RIBI) President, Peter King. Peter’s wife, Di, is incidentally a member of our Club. Some 51 of us sat down to dinner on the evening. The staff coped brilliantly with our 2-course meal, and the meeting ran like clockwork.

After a humorous introduction by Immediate Past District Governor Dick, Peter King addressed the Club. He talked about his travels throughout Great Britain and Ireland with Di, and what he had seen when visiting Clubs and their projects in their communities. He had now visited some 18 of the 29 Districts (his term of office ends at the end of June), and described the work being done by Rotary as exciting and wonderful. He added that Rotary was in good heart, and the Rotarians were doing good things and enjoying what they do.

His talk also looked at the ‘work’ side of his job, including the meetings at our Head Quarters in Alcester (near Stratford-upon-Avon), the work on developing our public image and the effort required to adapt our organisation’s structure to the needs of the 21st Century. He also spoke about Marketing, and using the talents of the staff and volunteers.

Questions from the floor included a request for more Social Media for Rotary (please note OUR links to Facebook and Twitter on our home page), a question on the unusual experiences during his travels around Great Britain and Ireland, and a question about the difficulties of travelling to the extremities of the territory.

The Club’s Vote of Thanks was given by Assistant Governor Helen, who described Peter as “A great positive voice for Rotary”. 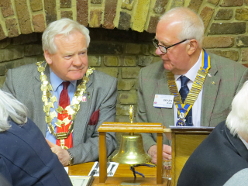 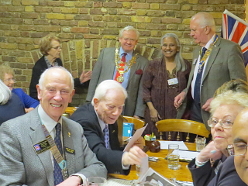 There was also time for a chat with our Club President Bryan, and a chance to talk about the work of our club. Later on in the evening, current District Governor David Palmer took time to speak about Peter’s visit to Silverline, and about the steadfast and dedicated help members of the Club were delivering to the Ukraine directly and through Fested Aid. 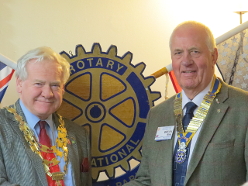 The meeting concluded just after 10pm.