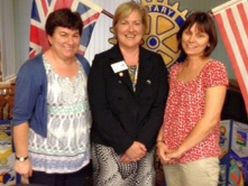 On 25th September 2013 we listened to a delightful talk by two very committed ladies who work for the London Borough of Brent in their Deaf and Hearing Impaired Service, and they work with children in schools and in their  homes.  Mary Tennant and Deborah Israel told us about different aspects of their work and how much it had meant, especially to the parents of very young deaf children, to be included in our ‘Kids Out’ to Paradise Park in June this year, because those parents had a chance to mix with other parents who had children with similar disabilities and, the children realised that there were other children just like them and hence didn’t feel so isolated.   Those parents have gone on to establish contact/friendship groups to share their knowledge and experience.

Deborah told us that babies are now having hearing tests almost immediately after birth before mother and baby leave the hospital.   If the results are unclear the baby is called back for a second test and depending on the results might then be either discharged or fitted with a hearing aid to recompense for the degree of hearing loss.   She told us that from the first minute a baby is born the degree of hearing a child has is vital for its full development and those babies who aren’t diagnosed until some months down the line are that many months behind in their learning ability based on sound.