His Worship the Mayor of Harrow 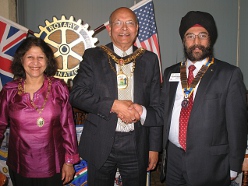 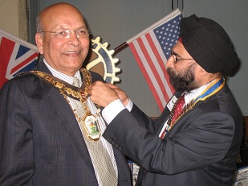 Our speaker on Wednesday 21 September was his Worship the Mayor of the London Borough of Harrow, Councillor Mrinal Choudhury accompanied by the Lady Mayoress Mrs Rama Choudhury. The Mayor came to the country in 1962 to study Electrical Engineering and completed a Masters Degree whilst working with British Telecom. He became a councillor in the London Borough of Harrow in 2002 and has been a resident in Kenton for the last 30 years. The Mayor demonstrated a fulsome knowledge of Rotary’s work around the world, and some of the details he introduced were unknown to one or two of the members! With his own background in India and our Scholar’s experience of China he said that the Rotary Club of Northwick Park had access to knowledge about the most important economic forces of the future – covering nearly 40% of the world’s population.

As is our custom, the Mayor Councillor Choudhury was invited to become an Honorary Member of the Rotary Club of Northwick Park, and he immediately accepted, saying that he was delighted to be invited to take part in such an active and fun club, especially as he lives close to where we meet. In the picture above, Mayor Choudhury is inducted into the Club with a special Rotary pin by our Club President Pushpinder Wadhwa.