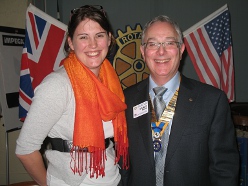 Our speaker on Wednesday 3rd November 2010 was Hannah Scott, Development Manager for South East and London of the Juvenile Diabetes Research Foundation (JDRF). Hannah was diagnosed with Type 1 diabetes when 8 years old, and even though she is not a ‘medico’, she was able to bring a lifetime of personal experience living with the condition. Hannah described the cause of diabetes, and how the body’s own cells attack the beta cells in the pancreas where insulin is made. Hannah then dealt with the control of blood sugar and the influence that every day events from sport to nightmares can have on the levels. She then described the progress that has been made to date in controlling diabetes starting with the discovery of insulin in 1921 – the disease itself was known to the Greeks in the 2nd Century AD. She brought us right up to date with two current research projects that fit in with the JDRF 5 Path Ways. First was the Artificial Pancreas – a device combining a continuous glucose monitor and an insulin pump; the second was Smart Insulin. a manufactured drug that can monitor glucose levels and attach itself to execessive glucose molecules in the blood. Hannah is an outstanding ambassador for JDRF, and is an accomplished speaker who motivates her audience. Thank you Hannah for an excellent presentation!