Our speaker on Wednesday 15 May 2019 was Reena Gupta, a Rotary Global Scholar studying for a Masters Degree in Public Health Development at the London School of Hygiene and Tropical Medicine (LSHTM).  Our meeting started late however, thanks to lane closures and three-way temporary traffic lights, bringing the traffic to a total standstill outside our venue.  Those using the trains or walking to get to our meeting were not delayed!

One of our members had been on holiday to Cyprus to visit friends near Paphos, and whilst there he had visited the Rotary Club of Paphos Aphrodite and brought back a bannerette as a token of friendship. 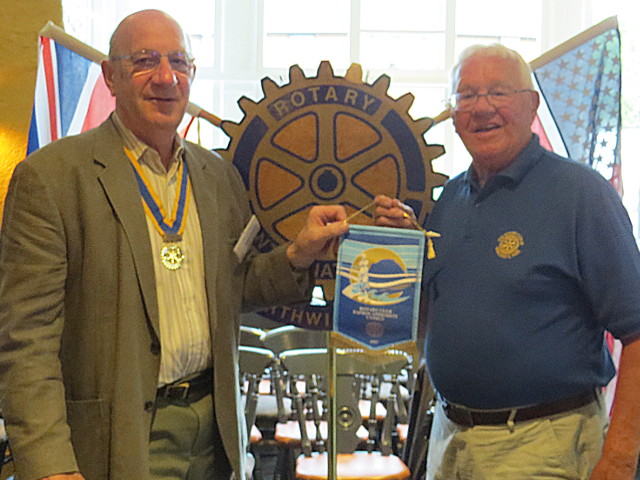 After reports on the District Training sessions for Clubs, the Nottingham National Conference, and the failed attempt to hold the Annual Business Meeting, it was Reena’s opportunity to speak to the Club.  Her father was a first generation immigrant to the USA, but she grew up near Charlotte, North Carolina.  In her childhood, she had developed Juvenile Rheumatoid Arthritis, a condition which she eventually she was able to outgrow, but even though she enjoyed science, her childhood experience with the world of medicine had convinced her that she did not want to be a doctor!  She was however interested in public health, and joined the organisation “Healthy Girls Save the World”.

After graduating, she had the opportunity to work overseas and ended up in Kitwe, Zambia.  This was her first time working in another country, and her work there on public health issues convinced her that she should pursue a career in public health management.  Her area of expertise was teaching young girls about Sexual and Reproductive Health.  A career changing opportunity arose in the Centers for Disease Control and Prevention (CDC) in Carson City, by Lake Tahoe in Nevada.  Whilst there, the Rotary Club of Reno agreed to support her application for a Global Grant Scholarship, and she was now working hard at the LSHTM for her Masters Degree.

Sadly, poor health has dogged her still – it is now Kikuchi, an auto-immune disease of the lymph nodes, but she is able to manage the symptoms.  She hopes to pursue a career in Public Health Teaching, possibly moving on to management and policy making in due course.  Eric proposed the Club’s vote of thanks, and we all wish her well in her future career.