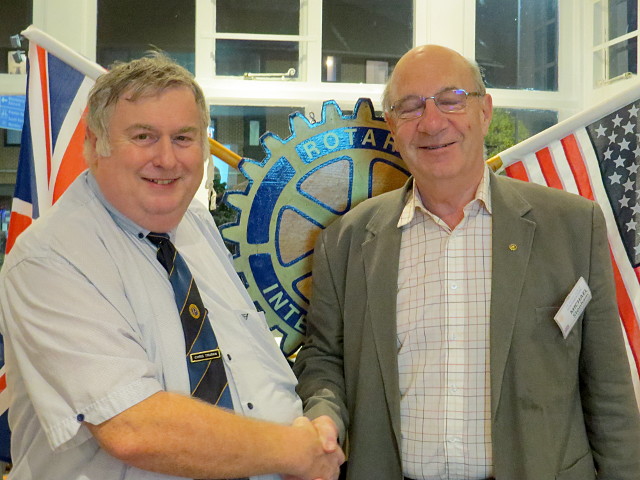 Our speaker on Wednesday 14 November 2018 was Chris Truran, a former Scene of Crimes Officer for the Metropolitan Police.

Our President did his best to squeeze a business meeting into the time before Chris spoke to the Club and a lot of business was conducted along with the circulated minutes of the recent Club Council Meeting.  There was also a ballot of the members in connection with the two candidates for the office of District Treasurer.  Inner Wheel are holding a quiz on 24 November in Greenford, and a Christmas Dinner on 10 December in Hatch End.

And with that, Chris Truran took the floor.  The history of finger prints is really fascinating.  People have made a mark with a digit on a piece of paper for over 2,000 years, but it took William Herschel (not the astronomer) to identify a method of classification of the finger prints that would allow the print from a scene of crime to be matched to a library of finger prints held by the police.  He found a way to establish the two key factors – persistence and uniqueness.  Persistence denotes that an individual’s finger prints do no change – boy, teenager, man, pensioner, the pattern does not change.  Proving the uniqueness took a lot of work, but that work paid off in that even identical twins do not have identical finger prints.  The Metropolitan Police have the cash box and the finger print that led to the conviction of the first criminal based on finger prints.

DNA exists in every single cell of the human body, a fact humans share with every other animal on the planet.  With just four types of bond (CGAT) but many millions of them, there is a unique pattern for each living organism.  Extracting the exact pattern is not an easy task.  We joined the ‘Pitchfork’ database system in 1995, and with computer analysis, the time taken to find a DNA match is dropping every year.  Contamination of DNA samples however is an issue as the technicians have to take great care that another cell or virus does not get mixed with the sample being analysed.

A fascinating talk and well recommended to other Rotary Clubs.