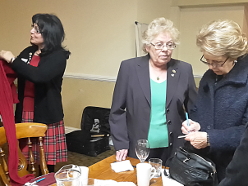 The meeting on 28 January 2015 was an Open Meeting – that is a meeting that was open to members of the public.

A number of last minute cancellations caused a little disappointment, but we all enjoyed the four short videos shown at the meeting, on Rotary as the original social network, on the Sydney Harbour Bridge Climb for End Polio Now, on the Club’s collection of clothing for refugees in the Ukraine, and on a new project for schools still in the planning stage for a “Simple Robotics Challenge”.

The Club has decided that it needs to do these evenings more often, and it will announce the date of the next event in the near future.