The Life of Ritu Kapur 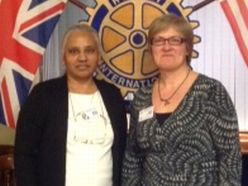 On the 22 January, our speaker was our very own Ritu Kapur.  Ritu gave us a fascinating insight into the journey of her life and accompanied this with some photographs that she passed round, from which we could see that she was a very bonnie baby indeed.

One of Ritu’s claims to fame was that for some of the time of her childhood, she lived quite close to Harry Webb, better known to us as Cliff Richard.

What came through from Ritu’s talk about her life and upbringing was that providing a good education to their children was a priority for Ritu’s parents and ensuring the children developed good principles and standards on which to build their lives.

Ritu told us of her migration to the UK and achieving her masters degree in psychology, from which she has had a career in nursery education.  She also made us laugh with the tales of her mother’s attempts to find her a suitable husband and how she eventually met Narinder and they have subsequently been
married for many happy years!