Save A Childs Heart 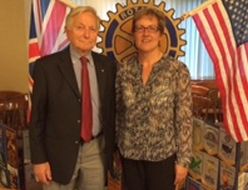 Our speaker for May 21st was Rotarian Walter Felman, Chairman of “ Save a Childs Heart UK” (SACH). Walter told us the founder and driving spirit behind Save a Childs Heart was the late Amram J. Cohen. It all started in 1995, Ami committed himself to operate on two children from Ethiopia who were in desperate need of cardiac surgery. From this modest beginning SACH under Ami’s leadership began, a dedicated volunteer group of professionals who have repaired the hearts of more then 3400 children.
Today there is a team of 70 surgeons ,cardiologists, physicians, technicians and nurses at the Wolfson Hospital in Tel Aviv, Israel. There are Jewish, Christian, and Muslim doctors trained in Israel carrying out procedures in 15 Countries over the past 17 years . They have brought together 86 surgeons, cardiologists ,physicians and nurses from developing countries in the advanced techniques of open heart surgery, anaesthesia and intensive care . They make no charge for their time.
They have saved the lives of over 3400 children from 48 countries, many of these in the child’s own country. More then 1800 of the children are Palestinian, Iraqi and Jordanian.
The last patient was a 3 year old from Peru.
So, from Angola to Zimbabwe, Save a Childs Heart has been in the forefront.
A word about our speaker. Walter is a member of the Rotary Club of Mill Hill which he joined in 1981. In 1999 he became chairman of Save a Childs Heart UK.
He has been awarded an International Service Above Self Award by Ron D. Burton, RI President. Walter retired from business in 1996 after a long and full career in commerce.