Trip to Everest Base Camp 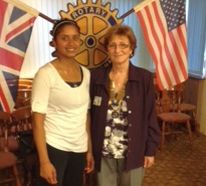 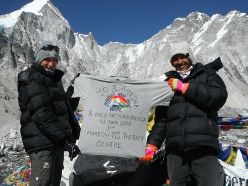 On 24 April we were treated to a fascinating talk illustrated by a visual presentation by Apekshah Patel of her trek to Mount Everest base camp.   Apekshah is a physiotherapist by profession and after qualifying could not find work so ended up by being a volunteer at the Harrow M S Therapy Centre but when their financial position improved back in 2008 she became a paid employee.  However, it was obvious that she is rather more than a mere employee so together with a fellow physiotherapist at the centre, Joanna, they decided they would undertake a fund raising trek to raise much needed funds for the centre.  It had always been a dream to visit the Himalayas so the trek to Base camp was decided upon.   The pair arrived in Katmandu on 22 February before flying on in a small rather scary aircraft to start the 16 day trek on 25 February.  This was before the trekking season really got under way which meant that most of the time the only other users of the track were yaks but the downside, winter had not fully passed so when after 8 days they reached Base camp the temperature was minus 25⁰c!  They were some 5500m above sea level.   They had paid for a guide and a porter which meant Apekshah and her friend took 1½ hour turns at carrying the other back pack.  Initially, this was not difficult but as they climbed with the air becoming ever more rarefied this task became almost unbearable at times but, pleased to say, the will to win prevailed and after eight days of walking 6/7 hours a day they were there, Base Camp.  ( AND to think Mike Billington was asking for sponsors to walk 5k. )  The various photographs we were shown highlighted the special beauty of the area.  Apekshah and Joanna funded their trip entirely from their own funds, flights plus about £875 each to hire the guide and porter and for the accommodation along the way which she would not describe as hotels but after Base camp it’s take your own tent!  The monies they raised from sponsorship, about £4,000 has been paid over in its entirety to the Harrow M S Centre.   Not your usual employees.  It was obvious Apekshah very much enjoys her work at the Centre and whilst the Centre is run by the members for the members it would seem that it is very much supported by the staff.  The club gave a small donation.