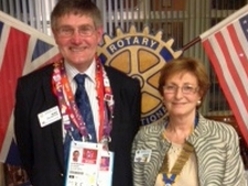 On Wednesday 6 March, our own Mike Billington talked to us about life in the Olympic Village during his time working there as a volunteer for the Olympics and Paralympics Games in London in 2012.   The talk was illustrated by numerous snap shots of the accommodation blocks, the medical centre, dining rooms, living accommodation and park sculptures, and by the many athletes he came into contact with during the games.

He worked with a large Canadian contingent during the Olympics and a much smaller group of athletes from the Faro Islands for the Paralympics.   Seeing all the photos he took gave us an insight into the parts of the park that the public couldn’t see, and the stories he told of his experiences during those few weeks were fascinating.   From his talk the mere logistics of getting people to the right place at the right time, making sure they had everything they needed etc. etc. is just mind boggling.   205 countries were represented at the Games.   The legacy of the games in terms of what each building will become has also been thought out carefully with the accommodation planned to be split into half social and half commercial housing.   A very large rotund building will become both a primary and secondary school for 1,900 children;  the medical centre will become the local medical clinic etc. etc.   We are all very proud of his commitment to his volunteer work for these Games which started long before the actual Games commenced and heartily congratulate him for his part in them.