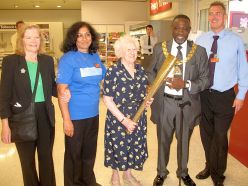 Sainsbury’s in Kenton, North West London has just committed to adopting the Rotary Club of Northwick Park as its chosen charity for the next 12 months.

As part of the celebration of the London 2012 Olympic Games, our Club Photographer, Dick, was on hand at Sainsbury’s for a special visit of not only the Olympic Torch but also the Paralympic Torch on Monday 13 August. Children lined up outside the store in order to have their photograph taken holding the silver paralympic torch. Also on hand for the occasion was Diana Gould, now over 100 years old, pictured with his Worship The Mayor of the London Borough of Brent, Cllr Michael Adeyeye and members of the Sainsbury’s Kenton Management Team.