A Little Piece of Brazil 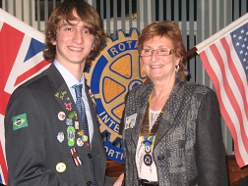 On Wednesday 17th October we were pleased to welcome back to the club Kevin de Witt, not as a visitor but to tell us something about himself and his home country.

As we know Kevin is in the U K as a school year exchange student and hails from Brazil.  What we did not know was that Kevin is just 17 and quite how fluent he was when speaking English, which was as well as there is not even a smattering of Portuguese spoken within the club.   As his name implies he lives in an area settled by the Dutch some hundred years ago and even speaks a little of the language.  It was through his step father, who had been a Rotarian in Holland that he first heard of Exchanges and pursued the idea via the local club after convincing his mother that at 16 he was ready to travel nearly 6,000 miles to a foreign land to further his education and personal development.

We learnt that Brazil is roughly the same size as Europe and as diverse.  He is from Holambra in Sao Paulo Province, not that far from Rio de Janeiro but completely different as are the rain forest areas to the north and to give us a little flavour of his vast home country showed a short promotional video.  Everyone seemed to be having fun in the sun which proves that London must have something very special.   He is currently studying the first year International Baccalaureate at Westminster College situated in not the smartest part of the capital but not too far from where he will be staying when his prospective hosts have completed their renovations.  Meanwhile he is enjoying the more leafy London suburbs of East Sheen at the Home of Peter and Di King, or Mrs. Youth Exchange, as she known throughout the Rotary.

It was an exceptional presentation from one so young, a personable student who is a fantastic ambassador for both his country and Rotary, and to know that all the time and effort invested in the programme is being so richly rewarded is more than pleasing.