“To get ahead – get a hat!” says President 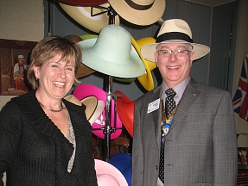 Our speaker on Wednesday 6 April was Jenny Frohlich, a former member of the Rotary Club of Golders Green and partner of next year’s assistant governor David Palmer. Jenny came to England from Ecuador in 1972 for one-year but decided to stay when she got here, and has been here ever since. She spoke about setting up her own business and after experimenting with various other ideas, found success with importing Panama hats. She had a display stand with samples and used these to illustrate her talk. The hats are made by hand in remote villages in Ecuador, but have to be finished here in the UK with shaping and trimming. They are called Panama hats because the people building the Panama Canal used them to protect themselves from the fierce sun! Most people are familiar with the standard natural colour of the hats, but Jenny also brought samples in a variety of colours, including one that was multi-coloured. The cheapest hats are about