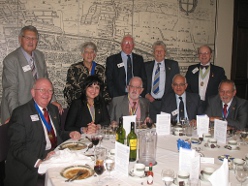 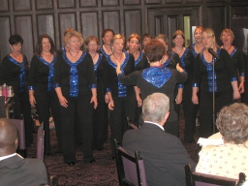 Some ten members of the Club made their way up to the Imperial Hotel in Russell Square on Monday 13 June 2011 for a Paul Harris Fellowship Dinner organised by the Rotary Club of Barking. Paul Harris was the founder of Rotary International, starting the organisation in 1905 in Chicago. Starting with a single club in Chicago, the organisation became international in 1911 – and we are celebrating the centenary of that event this year. Paul Harris died in January 1947, and in his memory the Paul Harris Fellowship was created. Many of the members of the Rotary Club of Northwick Park have been presented with a Paul Harris Fellowship by the other members of the Club in appreciation of their “tangible and significant assistance given for the furtherance of better understanding and friendly relations among the peoples of the world”. The purpose of the dinner was to celebrate Paul Harris’s contribution to Rotary and to the lives of today’s Rotarians, and an address to that purpose was delivered by Past District Governor Robert Hunter, from the Rotary Club of Barking. A response on behalf of all the Paul Harris Fellows attending was given by District Governor David Storrie of the Rotary Club of Greenford. Lest we became too serious during the evening, we were entertained by the Ladies Barbership Chorus Vocal Dimensions who had won a silver medal at last years National Finals, and very good they were too. But by the end of the evening, our thoughts were turning towards the new Rotary Year starting at the end of June, and the challenges that year will bring.