New Hospital Path proves its value in the rain 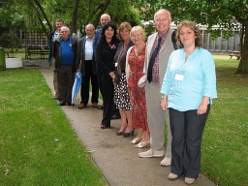 A new hospital path was opened by the Reverend Michael and Pamela Diffey at Northwick Park Hospital on Thursday 26th May 2011. The Rotary Garden at the hospital was first opened in 1986, and whilst it has been enjoyed for many years by patients and staff who are mobile, the Garden has not had good access for patients in wheelchairs. Some six years ago, Michael Diffey suffered a stroke and was transferred to the Northwick Park Rehabilitation Unit. His son was able to manoeuvre 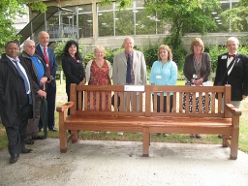 the wheelchair to the Rotary Garden, and Michael has fond memories of sitting there whilst he was recovering. Some six years later a path has been built from the corridor leading to the Rehabilitation Unit to the Rotary Garden, and several members of the Hospital staff and the management of the North West London Hospitals Trust gathered to see the path formally being opened. Sadly the weather did not oblige, and the ribbon had to be cut symbolically 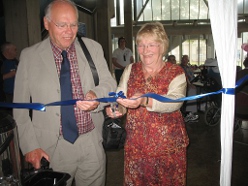 indoors. There was a good turn out of from the Club and we will be delighted that patients in wheelchairs will now be able to make full use of the garden.