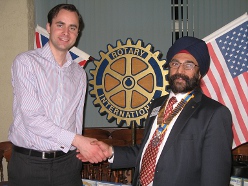 Our speaker on Wednesday 24 August 2011 was Matthew Jackson, a serial visitor to South Korea. Matthew was persuaded to join a friend on a trip to South Korea ten years ago, and since then he has visited the country each summer. He described North Korea as a tragic mess, but South Korea he thought has lessons for our country in our current economic climate. Matthew showed us a video about the advanced use of electronic equipment in South Korea, including autonomous washing machines and fridges, internet connected televisions and the ubiquitous hand-held DMB televisions. Next he moved on to the written language and the origins of the ‘Hangul’ alphabet in 1443. The alphabet has proved useful for groups that have an oral tradition since it adapts easily to any spoken sound. His last video was the story of Hyundai Shipbuilding Division and how the industry was able to expand in a time of overcapacity. The national library was briefly mentioned at the end. With a sip of a rice drink for us at the end, Matthew completed his rapid but intriguing tour of South Korean culture and customs. I am sure that many of us will want to know more now.