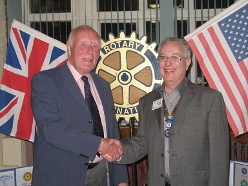 Our speaker on Wednesday 27th April 2011 was Rotarian David Wass from the Rotary Club of Golders Green. David had served in the Metropolitan Police, rising to the rank of Chief Superintendent. His work took him throughout north west London, the Caribbean and Isreal. Finally he came back to London and took early retirement from the police. It was then that he started a second career initially as a store detective and then as a security advisor to some of the shops at the Brent Cross Shopping Centre in north west London. David described a number of tells that allow store detectives to locate potential shop-lifters and described in detail how they obtain the goods without the staff in the store being aware that they are being robbed. He also described the scams associated with returning goods to a store that are not up to standard. David had us in fits of laughter during his talk, particularly with the antics of the less capable shop-lifters. Well done David, informative and entertaining – what more can one ask?