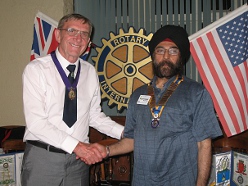 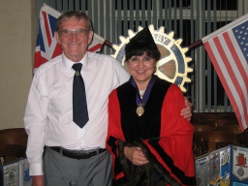 Our speaker on 3 August 2011 was Honorary Alderman of the London Borough of Harrow and past mayor of the borough, Keith Toms. Born in the valleys of South Wales to a mining father and a mother of gypsy descent, life at home started for him with an abundance of politics and emotion. After winning a scholarship, he came to England in 1959. He married in 1961 and they will be celebrating their Golden Wedding Anniversary in September this year. Keith pursued his joint careers as a committed left-wing socialist and educationalist. His membership of the Communist Party of Great Britain came to an abrupt end when he was expelled and subsequently he joined the Labour Party. His studies were interrupted by being arrested for rioting on 5 occasions, the last being during the infamous Grosvenor Square riot on 17 March 1968. He then turned to a career in education in Harrow whilst maintaining a strong interest in politics and the trades union movement. He helped prevent the closure of Northwood and Pinner Cottage Hospital and was active in supporting the miners during the three-day week and during the Miners Strike. The opportunity to serve as a local councillor arose, and he served continuously for 32 years. He stood for Parliament in 1983 and for the European Parliament in 1989 and was unsuccessful on both occasions. He stood down as a councillor in 2006 and to his great amazement was offered, by unanimous vote, the post of Honorary Alderman of the London Borough of Harrow by the then ruling Conservative Party! He then set about designing his own robes and regalia since his was the first incumbent in the Borough. He finished his talk by asking for a volunteer to model the costume. Well done Keith!