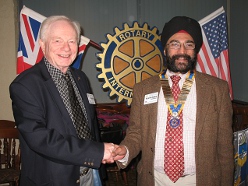 Our speaker on 26th October 2011 was our own George Myrants, who stood in at short notice for Ruth Orchard who was going to speak on Anti-counterfeiting. George and Sandy have counselled many Rotary Ambassadorial Scholars over the years, and from the list he selected “the best of scholars and the worst of scholars”! One scholar had come from Kenya to study for an advanced qualification as a laboratory technician and arrived in our country with just a small suitcase – which contained Kenyan Coffee rather than clothes. He, and also his parents, were unable to afford the dowry so that he could wed his girlfriend. Asked if he was writing home (George has a long memory!) to his mother, he said, “No. She cannot read”. He was very interested in everything in London, and the Rotary Club got together to buy him a camera and some film so that he could record his adventures whilst he was here. Later George heard that his career and his salary had progressed so that he was able to pop the question, and she and her father had said, “Yes!”. The other scholar was studying piano in London, and wanted to practice “all day every day”, but would only practice on a grand piano. George found a grand piano for hire and arranged for it to be moved to where the scholar was lodging. The practice sessions caused complaints from other lodgers, and the grand piano had to be moved many times. In the end, the scholar broke the rules of the scholarship, started teaching instead of studying, stayed in England and got married. Thank you George for the entertaining way you told the stories – we were moved with both accounts!

1 Response to George tells A Tale of Two Scholars