Better a Late Spring than No Spring 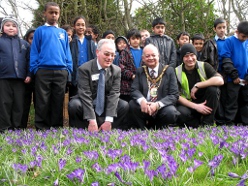 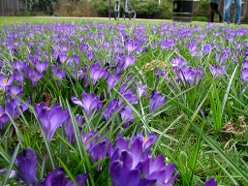 At long last spring has arrived and the crocus corms planted by pupils at Norbury School in Harrow have appeared. To celebrate their arrival, the Worshipful the Mayor of the London Borough of Harrow, Councillor Asad Omar invited pupils from the school and the President of the Rotary Club of Northwick Park to come along to the Harrow Recreation Ground on Tuesday 22 March 2011 to see how the flowers were doing. The plan was to have the flowers out for 23 February – Rotary International’s Birthday – but the long spell of icy weather in December, followed by another in January, meant the that crocus corms were going to appear once spring had truly arrived.

Many people ask why Rotary has chosen purple crocuses (croci). The first reason is that the corms normally flower on our birthday – the first Rotary Meeting was held on 23 February 1905. The colour purple was chosen to ensure that we all remember the progress that Rotary International has made in eradicating the disease poliomyelitis by immunising children around the world. One dose of vaccine is enough to provide protection, but young children often join the end of the queue, after they have been immunised, to get another dose! To ensure the vaccine is delivered to as many children as possible, the Rotarians paint the little finger of the children with a purple marker pen which takes a few days to wear off. This is the reason why we chosen purple crocuses. We also chose crocuses because they come up year after year, and Rotary will continue to immunise children year after year, until we receive the certificate from the World Health Organisation declaring that polio has been eradicated.