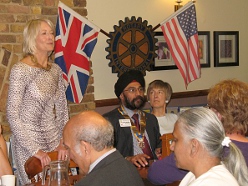 Our speaker on 27 July 2011 was Sandra Howard, Baroness Howard of Lympne, wife of the former leader of the Conservative Party. Sandra described how, as Sandra Paul, she got started it photographic modelling and how her first assignment was with Norman Parkinson and appeared in “Young Vogue”! Her next career was as the wife of a politician – husband Michael – which was a full time job with extraordinary hours in the run up to an election. Her third career as a mother was the one over which she had most control. Her fourth career was as a writer and started with a request to write an article for publication in the Sunday Express. That led to a request for an article for the Spectator about the experience of moving from Government into Opposition. That led to an approach by a helpful agent who guided her into a career writing fiction. Her passion is writing about people falling in love, and her three published books follow the story of a political heroine working her way through the difficult situations that Sandra imposes on her. Her fifth career is as a charity fundraiser for the National Centre for Young People with Epilepsy. This is an interesting and exciting life story told by an expert raconteur!

5 Responses to Baroness Howard of Lympne tells her story