A Visit to Paradise on Rotary’s Birthday 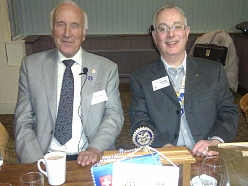 Our speaker on Rotary’s Birthday, 23rd February 2011, was Rotarian Malcolm Dellbridge from the Rotary Club of Greenford. Malcolm has been a regular visitor to the Cook Islands, and took us on a tour of life in the Islands. With a population of about 20,000 spread over fifteen islands occupying an area of ocean about the size of Europe, life there is quite different. The local population arrived in the 6th century with the first European visitors arriving in the 16th century. The capital is Avarua on the island of Rarotonga, where Malcolm stays. The island is almost circular and has two buses – one going clockwise and the other anti-clockwise. A circuit takes 45 minutes so it is one bus an hour in each direction. The island is self-sufficient in vegetables and fruit, but relies on New Zealand as a source of other items. New Zealand also provides higher education for the islands. The island is full of churches with a high proportion of islanders attending regularly. A central mountain (650m) with jungle ensures that the people stay on the coast. Even so the beaches are deserted (according to Malcolm). The principal export is Black Pearls. Thank you Malcolm for taking us to paradise on a damp February evening!