A Chance for the Children 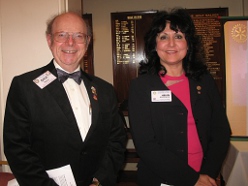 Our speakers on 19th October 2011 were our own members Helen and Dick. They took as their subject the visit they had made to the Ukraine in July 2011 to look at the Revival Centre in Chernigiv (not the correct spelling but phonetically correct!). They described how there had been an explosion at the Chernobyl nuclear power station in 1986 (50 miles to the west) and the difficulties for the population. The state paediatrician at that time was Dr Vasil Pasichnik (Dr. P). After being dismissed by the government for his demands on behalf of the children, he established the Revival Centre in Chernigiv to provide multi-disciplinary care and treatment for the children affected by the disaster. Now the same genetic faults have appeared in the second generation. Felsted Aid for Deprived Children have been taking aid to the centre for over 15 years, but recently they have had a run of bad luck with their vans. Whereas they initially had four vans, they are now down to one reliable vehicle. After a PowerPoint presentation and a short video, the questions went on for another 30 minutes! – surely a measure of the interest the club took in the project to bring Felsted Aid back up to strength again. Well done Helen and Dick, and all strength to your project!