Focus on the Crocus in Harrow Observer 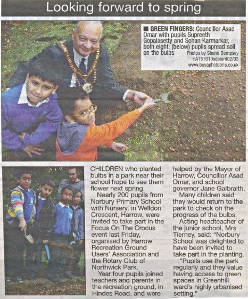 Children who planted bulbs in a park near their school hope to see them flower next spring. Nearly 200 pupils from two local schools were invited to take part in the “Focus on the Crocus” event last week, organised by the Rotary Club of Northwick Park and the Harrow Recreation Ground Users’ Association. Year four pupils joined teachers and parents at the Recretarion Ground and were helped by The Worshipful The Mayor of the London Borough of Harrow, Councillor Asad Omar – who is an honorary member of the Rotary Club of Northwick Park