Our speaker on Wednesday 2 September was Rotarian Tony Sharma, who brought with him the Rotary Flame – an Olympic style torch which is keeping the goal of Ending Polio in front of the public and in front of the Rotarians.

Tony brought with him a video that showed the Rotary Flame arriving in Brazil at the International Convention in Sao Paolo. He also spoke about how he had used the torch to focus the thoughts of his friends and his family on to the task of ending polio. In particular he had used a business trip to Florida to both interest friends who were not in Rotary to find out a little more, and also – in one case – recruit a lawyer into his local Rotary Club there. With his family, it had been a cupcake tea party for a daughter.

The fulcrum on which this had been achieved was the generous offer of the Bill and Melinda Gates Foundation. For every £1 raised by Rotary or Rotarians for End Polio Now, the Gates Foundation is donating an extra £2, making this a “Buy one, get two free offer”.

A series of questions followed his talk, and President Ritu and then all the members of the Club were photographed with the torch.  The evening raised £50 for End Polio Now, which with the Bill and Melinda Gates Foundation donation of £100 means that the exercise raised £150.00 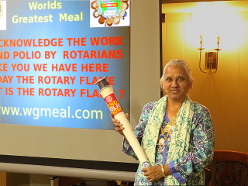 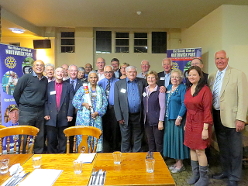 At the meeting, we had a Rotarian visitor from the Rotary Club of Fort Bonaficio in the Philippines.