Coalitions versus one party government 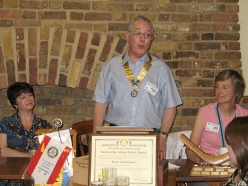 On Wednesday 6 May we had a discussion led by Past President Stuart. His chosen subject – topically – was “What Type of Government Would Be Best for Our Country?” As a good Rotarian, it was a discussion in principle rather than a party political polemic.

Stuart posed a series of questions – for example “Is a coalition government beneficial to all?” “Are Hung Parliaments Good for the country?” “Is proportional representation a good solution for providing political diversity?” “What sort of government builds better friendships in the country?”

Points raised by members during the discussion included small political parties being able to temper the extreme policies of large parties when in a coalition, keeping the government in check. The make-up of a coalition can also determine whether the end result is ‘good’ or ‘bad’ for all concerned – a question of moderation versus paralysis!

The general consensus of the Club was that a coalition by and large is better for the country than a single party having ‘free rein’ in government. As we found out the following day, the Club’s general consensus is not shared by the active electorate in our country!