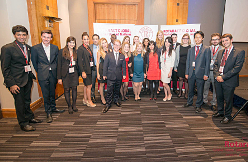 The 2014 Rotaract Global Model United Nations 2014 got under way on Thursday evening, 4 September 2014, with a dinner at the Holiday Inn in Bloomsbury, Central London. There were some 90 people at the dinner, representing 25 countries.

For three days, the Rotaract members, aged 18-30, will work on a number of issues in a mixture of workshops and breakout sessions on issues including Gender Equality, Capital Punishment, Leadership Philosophies, Climate Change, Human Rights in the Middle East and Peace Building in the Middle East. These are all difficult subjects, and the resolutions passed by the Rotaractors will be delivered to the United Nations in New York on the UN Rotary Day in November 2014.

This is the second such Rotaract Global Model United Nations meeting – the first was organised in Romania last year. It is a daunting prospect, but the process of discussion provides opportunities for learning.

There are lighter elements to the programme, including a gala ball, a beer and whisky tasting event, and a scavenger hunt. Past District Governor Dick was at the event representing both Rotary in London and our Rotary Club. 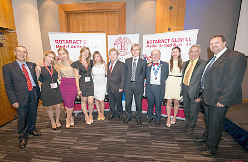