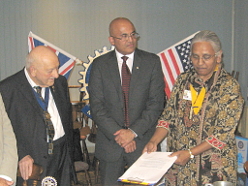 On 14 September 2014, President Elect Ritu stood in for our President and inducted a new member – Pankaj. Pankaj is involved with Secondary Education, and brings an important skill set to the Club based on IT and Business Studies.

With his sponsor Helen absent at a District Meeting in York Gate, David Baker stood in and did his proposal speech. It was no great burden for him as Helen, David and Pankaj all live in the same road! 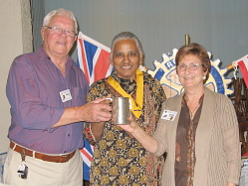 President Elect Ritu also congratulated the members of the Club on their stall at the Pinner Village Show the previous weekend, and awarded the Fellowship Cup to Doug and Sandy for having organised much of our pitch. 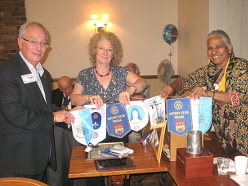 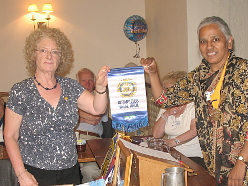 Lastly, Di had now received the missing banners from the Clubs that had sent Youngsters to the London Youth Exchange Camp back in July, and presented them to the Club. She also presented the banner she had received from our visitor Luiza Lopez, who had been at the Club on 27 August 2014.