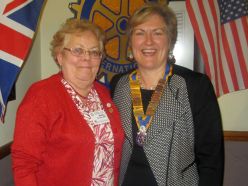 At our Christmas meal, our speaker was our very own Mollie Hacking MBE.  Mollie gave us a very interesting talk, accompanied by a film, of what happens when one goes to the Palace to collect such an award as an MBE.  Each recipient of such an award is able to buy a film of the day which includes individual footage of them collecting their award, which on this occasion was from Prince Charles.  Mollie told us that she received notification that she would be receiving an award but could tell no one for several months!  Mollie received her award for charity and community support during her long career in the civil service and we all agreed that she was a very worthy recipient.