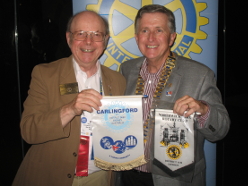 Club member and District Governor Dick, along with Club member June spent Tuesday evening with the Rotary Club of Carlingford, a suburb North West of Sydney – just as Northwick Park is a suburb North West of London. Along with the usual banner exchange with President Colin Booth, Assistant Governor North West Area Liz was also in attendance. The Club put on a superb presentation with young musicians from a local school, reports on projects in the Philippines, Syria and the local Blue Mountain area, and a detailed explanation of their fundraising techniques which raise about £80,000 per year. We also had a singer that the club had sponsored, Heads and Tails, and a selection of National Anthems.

All told a bonza evening!