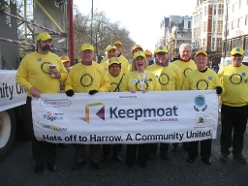 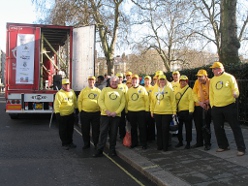 The Club was present at the London New Year’s Day Parade in the centre of London on 1st January 2013 (strangely enough!). The day was a mix of welcome sunshine and a bitterly cold wind which made the shady parts of the route very chilly indeed. The Club was there to support the London Borough of Harrow’s “Hats Off to Harrow” theme which was well received by both the public and the judging panel. The theme of “A Community United” was very close to the Rotary ethos, and was well supported by a number of local community groups. Key features for the entry were the dancers from Flash Musicals and from Sugar Plum Dancers, and Her Majesty the Queen portrayed by Mary Reynolds. Also taking part were the Gurkha Welfare Society, Age UK Harrow, the Sai School, Harrow School, the Tamil, Bengal and Bangladesh Community Associations, and the Harrow Deaf Club. Support also game from the Friends of Princess Margaret Hospital (Jamaica) and our friends from Barclays Bank plc. The crowd has been estimated at half a million people and His Worship Councillor Nizam Ismail, Mayor of the London Borough of Harrow was their to support the team.

A video of the event is available by clicking on Photos & Videos, Video Album,
or by clicking here.

This entry was posted in Uncategorized. Bookmark the permalink.