Anecdotes of a London Taxi Driver 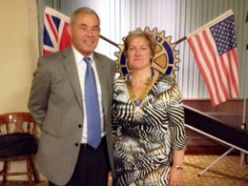 Our speaker on Wednesday 30 October was Laurie Staal who is a long term friend of Stan Jacobs.Laurie retired 4 years ago and his reminiscences as a London taxi cab driver were both interesting and informative.
His talk was well received by the large audience who,judging by the large number of questions which followed,could have listened to him for longer.
The club gives thanks to both Laurie for his talk and to Stan for introducing him to us.