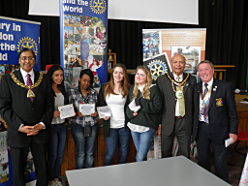 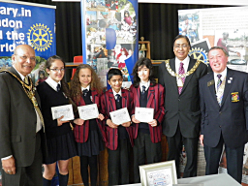 On Tuesday 20 March 2012, Teams of youngsters from (in alphabetical order) Bentley Wood High School for Girls, Copthall School and Mill Hill County High School assembled at Bentley Wood High School for the Rotary Technology Tournament. Contestants were required to build a coin-sorting machine. The entrants for the Basic competition had to sort 2p coins from 1p coins, whereas the entrants for the Advanced competition had to sort 1p, 2p, 5p, 10p and 20p coins and count them automatically. (On the day there were no entrants for the Intermediate competition.)These tasks are even harder when they have to be achieved with paper, card, string, staples, lollypop sticks and string! Both competitions produced winners who found a workable solution, and prizes were awarded. There was also a special innovation award to a team from Mill Hill County High School (see below) who employed a twisting pendulum in their design which worked to great effect! Prizes were awarded in the presence of His Worship the Mayor of the London Borough of Brent, Councillor Aslam Choudry and His Worship the Mayor of the London Borough of Harrow, Councillor Mrinal Choudhury, and The Rotary District Governor for London Trevor Johnson. Special Thanks are due to Bentley Wood High School Headteacher, Janice Howkins; without her support and kind permission, we would not have had the excellent venue in which to hold the event. Well done to all the contestants and to all the Rotarians who helped prepare the event and attended on the day! 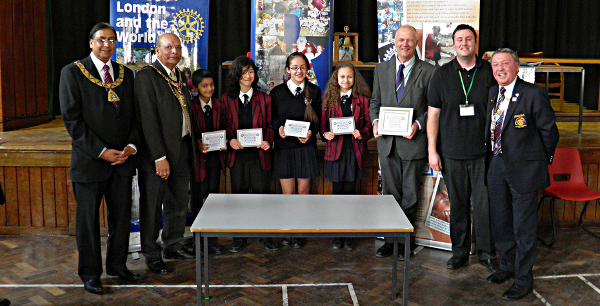