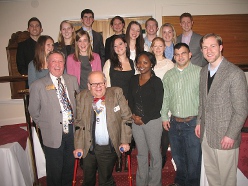 On Monday 13th February 2012, Dick and our Rotary Ambassadorial Scholar Dennis (pictured in the back row on the left) attended the special Rotary Foundation Dinner held by the Rotary Club of Radlett each year. The Master of Ceremonies for the evening was Radlett Rotarian Nigel Rogers, who demonstrated his very wide range of languages to great effect in introducing the scholars. In total there were 16 scholars present (one had to leave before the photograph was taken) and we were treated to a short recital by Rotary Scholar and Violinist Pierre. In total, there were 12 Ambassadorial Scholars and 4 Global Scholars present. Club President Colin Powell and District Governor Trevor Johnson both spoke eloquently about the achievements of the scholars over the past 64 years.