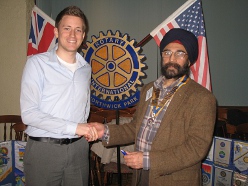 Our speaker on 25 January 2012 (which was Burns Night although without any Scots members we had no one to show us what to do), our speaker was Jan Kellerhof who comes from the village of Meiste, just outside Lippstadt in the centre of Germany. The previous Rotary Year (2010-2011) Jan had been a Rotary Ambassadorial Scholar, and he had spent a year studying for a Masters Degree in the University of Singapore. He took Singapore – the Lion City – as his main theme and told us a lot about Singapore and the role Rotary plays in their local communities. Whilst there are just 22 Clubs in the city, they are all very active, with the largest club having some 150 members. All but one of the clubs conduct their business in English; the one club is bilingual speaking both Chinese and English. Jan described some of the projects undertaken by the clubs last year. He described how it had been difficult to get to know Singaporean families, but once he had persevered he found them very friendly and genuine. Jan is now working in St Albans, but we hope that we can build a long term relationship with him for the future.