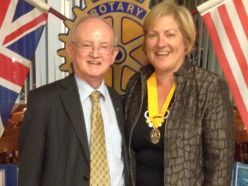 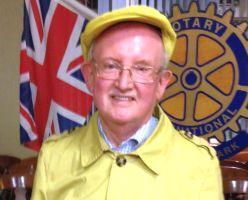 Our good friend Clive Amos talked to the club, on Wednesday 12 September, about his experience playing a Grandfather at the Closing Ceremony of the Olympic Games.

The whole cycle started before Christmas 2011, when Clive applied to get involved. After 2 auditions in the New Year, he was advised that he was selected to play the Grandfather on the Yellow Truck, one of ten in the Ceremony – the tableau depicted a street party.

Rehearsals took place in a large car park in Dagenham and sometimes they had to be present for 10 hours, even though they rehearsed for far less time.

The attention to detail was incredible for something that was so far from the audience and was unlikely to be picked up by TV cameras for any significant length of time. Clive wore part of his costume during his talk, which underlined how much thought had gone in the planning for the event.

The cast were fully choreographed for their performance and then exited through the audiences to great applause and congratulation.

A fascinating talk, on another aspect of the successful London Olympic Games.